Whenever the New York City police department encounters a mystery so strange it seems impossible to solve, they head to Columbia University in search of Professor Craig Kennedy. When he’s not lecturing students on the science of chemistry, Kennedy uses his superlative intellect and his facility with the latest technological advancements to capture the city’s most diabolical villains. In “The Confidence King,” he matches wits with a thief whose counterfeiting skills extend from paper currency to fingerprints. In “The Firebug,” Kennedy stops an arson epidemic by means of sophisticated handwriting analysis. And in the title story, the surprise antidote to a case of cyanide poisoning turns out to be as dangerous as it is effective.

First appearing in the pages of Cosmpolitan magazine, scientific detective Craig Kennedy was so popular during the early twentieth century that he became known as the “American Sherlock Holmes.”

This ebook features a new introduction by Otto Penzler and has been professionally proofread to ensure accuracy and readability on all devices. 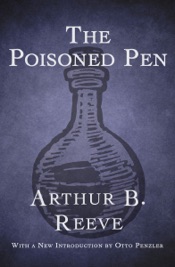