In 1900 many eminent scientists did not believe atoms existed, yet within just a few years the atomic century launched into history with an astonishing string of breakthroughs in physics that began with Albert Einstein and continues to this day. Before this explosive growth into the modern age took place, an all-but-forgotten genius strove for forty years to win acceptance for the atomic theory of matter and an altogether new way of doing physics. Ludwig Boltz-mann battled with philosophers, the scientific establishment, and his own potent demons. His victory led the way to the greatest scientific achievements of the twentieth century.

Now acclaimed science writer David Lindley portrays the dramatic story of Boltzmann and his embrace of the atom, while providing a window on the civilized world that gave birth to our scientific era. Boltzmann emerges as an endearingly quixotic character, passionately inspired by Beethoven, who muddled through the practical matters of life in a European gilded age.

Boltzmann's story reaches from fin de siècle Vienna, across Germany and Britain, to America. As the Habsburg Empire was crumbling, Germany's intellectual might was growing; Edinburgh in Scotland was one of the most intellectually fertile places on earth; and, in America, brilliant independent minds were beginning to draw on the best ideas of the bureaucratized old world.

Boltzmann's nemesis in the field of theoretical physics at home in Austria was Ernst Mach, noted today in the term Mach I, the speed of sound. Mach believed physics should address only that which could be directly observed. How could we know that frisky atoms jiggling about corresponded to heat if we couldn't see them? Why should we bother with theories that only told us what would probably happen, rather than making an absolute prediction? Mach and Boltzmann both believed in the power of science, but their approaches to physics could not have been more opposed. Boltzmann sought to explain the real world, and cast aside any philosophical criteria. Mach, along with many nineteenth-century scientists, wanted to construct an empirical edifice of absolute truths that obeyed strict philosophical rules. Boltzmann did not get on well with authority in any form, and he did his best work at arm's length from it. When at the end of his career he engaged with the philosophical authorities in the Viennese academy, the results were personally disastrous and tragic. Yet Boltzmann's enduring legacy lives on in the new physics and technology of our wired world.

Lindley's elegant telling of this tale combines the detailed breadth of the best history, the beauty of theoretical physics, and the psychological insight belonging to the finest of novels. 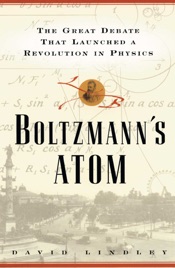