The book that made Mark Twain famous and introduced theworld to that obnoxious and ubiquitous character: the American tourist

Based on a series of letters first published in American newspapers, The Innocents Abroad is Mark Twain’s hilarious and insightful account of an organized tour of Europe and the Holy Land undertaken in 1867.

With his trademark blend of skepticism and sincerity, Twain casts New World eyes on the people and places of the Old World, including London, Paris, Rome, Odessa, Constantinople, Damascus, and Jerusalem. He skewers the idiosyncrasies and pretensions of Americans abroad and delights in tormenting the local tour guides. In Lake Como, he insists that Lake Tahoe is nicer. In Genoa, he and his fellow travelers claim they’ve never heard of Christopher Columbus.

First published in 1869, The Innocents Abroad made Mark Twain a national celebrity. For the rest of the author’s life, it outsold all his other books, and remains one of the bestselling travelogues of all time. Part satire, part guidebook, it’s a must-read for fans of this inimitable author and anyone who has experienced the pleasure and the pain of being a tourist.

This ebook has been professionally proofread to ensure accuracy and readability on all devices. 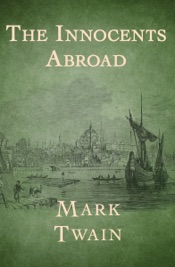