Every culture is governed by an internal code of conduct, and this publication captures the code of Saudi culture. Most Saudi norms have long been unwritten and only orally communicated among citizens. As a result, visitors to the country have been unable to read about these norms. For this reason, this book spells out these norms in bold print. It provides bite-sized descriptions of ‘the Saudi’. It is informed by around 2,000 interviews with Saudis and expats. It is the first to talk about the culture in a purely descriptive (and therefore non-judgemental) manner. Writings about Saudi culture tend to be too serious; however, this publication is meant not to be taken too seriously. It is, rather, intended to be entertaining (and, surely, informative). It is written mostly on the toilet (and is, likewise, meant to be read on the toilet). It avoids being biased, recording both ‘negative’ and ‘positive’ norms. It tries to avoid using such sensitive words as ‘religion’ and ‘politics’, considering that it is written entirely for cultural orientation (not for religious or political matters). The book is the first to be written by a male Saudi who was born and raised in the country, who is still based there, who is a former officially-recognised ‘imam’ (i.e. a worship leader) and who comes from a working-class family. Yet, he is a traveller, professor and Oxford graduate. He has been with people from different ethnicities. He has published in different languages and with globally known publishers. Hence, he has shown an ability to communicate with international readers and convey information to foreign mentalities. 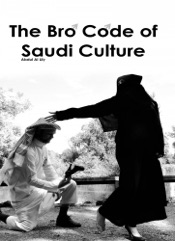