The booklet begins at Summit Garden, a site that overlooks Tel Aviv, a city that grew out of the sand a hundred years ago to become a major city. At the foot of the lookout is a small, almost unnoticed archeological site that has an amazing story behind it. The path continues to the main square of old Jaffa, where St. Peter’s Church stands. Although Jaffa doesn’t have the importance of Jerusalem or Nazareth, the church commemorates the beginning of the separation of Christianity from Judaism. The tour continues through the alleys down to the port of Jaffa. The port is not impressive but it was nonetheless the gateway to Israel, the first thing that generations of pilgrims and pioneers saw. The point where reality met their dreams of the Holy Land, as each of them saw it. The next stop is where Adolf Eichmann was held after being brought to Israel for a trial that shook Israeli society. From there the trail visits the American colony, three narrow streets that tell the story of the groups of Americans who attempted to settle in Jaffa. All of them failed miserably but three of the most prominent American writers – Herman Melville (Moby Dick), Mark Twain and John Steinbeck – had some connection to these settlements. The trail ends at Neve Tzedek, the first Jewish neighborhood to lie outside the old city walls of Jaffa. I added two chapters about Rabin Square and Sarona, the newly renovated German colony.

There are many well-known travel guides available. They recommend different itineraries, accommodation and dishes, and generally provide a small amount of information about a lot of different places. My approach is different. On my website you can find all the general information you need to know about Israel (accommodation, transportation, food, society, etc.) whereas the booklets present detailed information on the sites alone. As a tour guide who has been to the sites hundreds of times I am able to relate the history of each through its artifacts and integrate into the text the answers to the most frequently asked questions.
The booklets are in English but written such that non-native English readers can also understand the text. 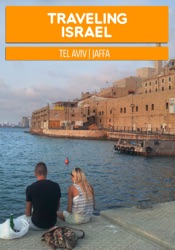