A look at faith through the voices of children from varied religious backgrounds, by the Pulitzer-winning author of The Moral Intelligence of Children.

What do children think about when they consider God, Heaven and Hell, the value of life in the here and now, and the inevitability of death? Child psychiatrist, Pulitzer Prize-winning writer, and Harvard professor Robert Coles spent thirty years interviewing hundreds of children—from South America and Europe to Africa and the Middle East—who are developing concepts of faith even as they struggle to understand its contradictions.

Be they Catholic or Protestant, Jewish children from Boston, Pakistani children in London, agnostics, Native Americans, or young Christians in the American South, they offer honest, enlightening and sometimes startling ideas of a spiritual existence. A Hopi girl who knows for a fact that we are resurrected as birds; an African American child who believes God exists as a hurricane to “blow away” drug dealers; a young Christian who needs his faith to cope with the death of his sister, lest she be just “a big heartache to us till the day we die”; and a Tennessee child who rationalizes his belief by admitting that “if there's no God, that's all there is, ashes.”

The Spiritual Life of Children is “a remarkable book. The generosity of vision that characterizes Dr. Coles's enterprise enables him to create a climate where words of great beauty and truthfulness can be spoken.” —The New York Times 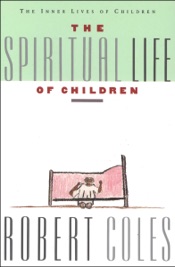