Five heroes are better than one! Find out why everyone loves a man in uniform in this high-octane box set featuring five full-length military romances.

After three deployments, David Cruz is back in the States and running the Hope's Crossing kennel to train dogs for military applications. But when Atlas, a Belgian Malinois suffering from PTSD, returns from duty and shows no signs of improvement, David realizes he needs to call in the big guns. Enter Evelyn Jones, a celebrated dog whisperer. Sparks fly between Lyn and David immediately, and not in a good way. When a threat on Lyn's life seems linked to Atlas's handler's death, the two must find a way to work together to protect the kennel, the dogs, and the fragile peace they've built for themselves.
Heated Pursuit by April Hunt
After Penny Kline walks into his covert ops mission, Alpha Security operative Rafe Ortega realizes that the best way to bring down a Honduran drug lord and rescue her kidnapped niece is for them to work together. But the only thing more dangerous than going undercover in the madman's lair is the passion that explodes between them...

Next to Die by Marliss Melton
Penny Price is convinced that the person barraging her with threatening calls is a man who got away with her father's murder. Armed with evidence but branded a target, Penny's only salvation is the playboy next door-Navy SEAL Lieutenant Commander Joe Montgomery. The sole survivor of the worst disaster in Special Forces history, Joe has been drowning his guilt in a potent mix of alcohol and isolation. Penny refuses to indulge his behavior and a tentative friendship begins, charged with desire. But as her father's killer sets his sights on Penny, all bets are off.
A Hero to Come Home To by Marilyn Pappano
Two years after losing her husband in Afghanistan, Carly Lowry has finally rebuilt her life. She's comfortable and content...until she meets ruggedly handsome Staff Sergeant Dane Clark. Struggling to adjust to his new, civilian life, he finds comfort in Carly's unexpected attention. But, when Carly discovers that he's been hiding the real reason he's come to town, will Dane be able to convince her he's the hero she needs?
Back to You by Jessica Scott
When Trent Davila almost lost his life in combat, something inside him died. He couldn't explain the emptiness he felt or bridge the growing distance between him and his family-so he deployed again. And again. And again...until his marriage reached its breaking point. Now Trent has one last chance to prove to his wife that he can be the man she needs. 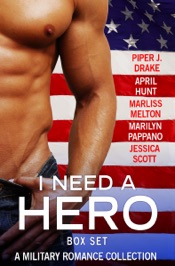