This book it’s a visual history of the events that led Porsche to it’s 19th overall victory at the 24 Hours of Le Mans from the official test of the WEC 2017 season in Monza and the races in Silvertone and Spa, the official test day at Le Mans and the ambience of the race week, relevant statistics and facts from the race. Many of the photographs of this book had never been shown before.
The 2017 season started very well for Toyota, the team set the best times at The Prologue in Monza and victories in Silverstone and Spa, the advantage of Toyota continued at the official test in Le Mans, and in the qualifying practice sessions the team secured the front row of the starting grid, but this is Le Mans. 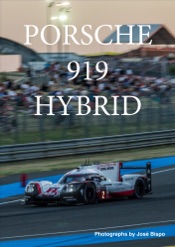