Three essential works that redefined the art of journalism by “one of our sharpest and most trustworthy cultural observers” (The New York Times).

In these masterpieces of razor-sharp reportage, the National Book Award–winning and New York Times–bestselling author proves herself one of the premier essayists of the twentieth century, “an articulate witness to the most stubborn and intractable truths of our time” (Joyce Carol Oates,  The New York Times Book Review).

Slouching Towards Bethlehem: America in the 1960s—a pivotal era of social change and generational divide. Here is Joan Didion on the “misplaced children” of Haight-Ashbury as well as John Wayne in Hollywood; folk singer Joan Baez and reclusive billionaire Howard Hughes; the extremes of both Death Valley and Las Vegas. Named to Time magazine’s list of the one hundred best and most influential nonfiction books, this is “a rare display of some of the best prose written today in this country” (The New York Times Book Review).

The White Album: A New York Times bestseller, this landmark essay collection confronts the dark aftermath of the 1960s. From a jailhouse visit to Huey Newton, cofounder of the Black Panther Party, to a recording session with The Doors, from the culture of shopping malls to the contradictions of the women’s movement, Joan Didion captures the paranoia and absurdity of the era with irony and insight. And in the iconic title essay, she documents her uneasy state of mind during the years leading up to and following the Manson murders—a terrifying crime that, in her memory, surprised no one.

After Henry: Whether reporting on a Hollywood murder or the “sideshows” of foreign wars, Joan Didion crystalizes her reputation as a brilliant essayist. Highlights include a portrait of the White House under the Reagans, two “actors on location”; an unexpected meditation on the Patty Hearst case; and an exposé on the racial divisions and class fault lines of New York City following the rape of the Central Park jogger. An indispensable collection from a writer on whom we can rely “to get the story straight” (Los Angeles Times). 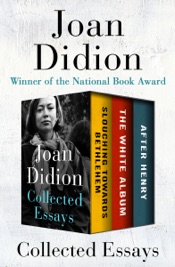