Featuring a new introduction and a “Back Home” afterword, Shortest Way Home is Pete Buttigieg’s inspirational story that challenges our perception of the typical American politician.

The meteoric rise of the mayor of a small Midwest city, who defied every pundit’s odds with his electrifying run for the presidency, created one of the most surprising candidacies in recent American history. The fact that his New York Times best-selling memoir, Shortest Way Home, didn’t read like your typical campaign book only added to “Mayor Pete’s” transcendent appeal. Readers everywhere, old and young, came to appreciate the “stirring, honest, and often beautiful” (Jill Lepore, New Yorker) personal stories and gripping mayoral tales, which provided, in lyrical prose, the political and philosophical foundations of his historic campaign.

Now featuring a new introduction and a “Back Home” afterword, in which Buttigieg movingly returns with the reader to his roots in his hometown city of South Bend, Indiana, as well as a transcript of the eulogy for his father, Joseph Buttigieg, Shortest Way Home, already considered a classic of the political memoir form, provides us with a beacon of hope at a time of social despair and political crisis. 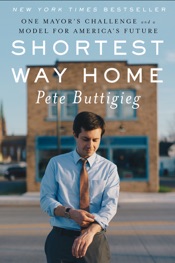