They’ve suffered devastating losses, but they’re not done fighting yet.

After Hunter and The Militia escape from Selma, they learn Maunhouser is working on a new weapon even more powerful than those already unleashed.

Faced with this new threat, how far is Hunter willing to go to protect those around him? And what is he willing to become to stop Gerome Maunhouser?

Find out now in the exciting conclusion to Hunter’s narrative in The 28th Gate: Volume 6!

Set in a far distant future, The 28th Gate is a series of tales that will appeal of fans of space marines, space fleets, and military hard science fiction. The series consists of eight volumes spread across four seasons telling the story of Hunter’s struggles against the AAA corporation that created him. Each volume contains six episodic novelettes each with the action, character, and plotting of a complete story all crammed into an espresso-like package, while each season chronicles a different arc in the overall epic. 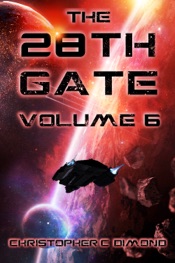