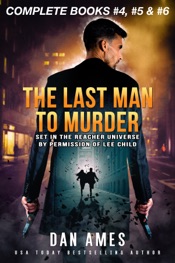 THE LAST MAN TO MURDER: A man, barely alive and beaten within an inch of his life, collapses at Michael Tallon's door.  He dies before Tallon has a chance to learn anything from him.The only clue?A crumpled piece of paper, covered in the dead man's blood, with two words:Operation Reacher.Intrigued, Tallon searches his memory and soon realizes he knew the man. A former soldier.His investigation leads him to the Outer Banks of North Carolina where it's clear the people responsible for his friend's death want the case to go away, and Tallon with it.Forever.

THE MAN WITH NO MERCY: Former FBI agent and current private investigator Lauren Pauling is brought in by the Bureau to help solve a chilling mystery: someone is kidnapping women who share only one distinctive trait: a history with Jack Reacher. Pauling is also brought in for her own protection - she has a history with Reacher and may be next on the list.Working with ex-Special Forces soldier Michael Tallon, Pauing races to catch the madman before he strikes again.

A MAN OUT FOR BLOOD: $10 million to kill Jack Reacher.When the family of one of the richest men in the world is murdered, evidence points to Jack Reacher as the killer. The billionaire puts a $10 million bounty on Reacher's head.Soon, three assassins are on Reacher's trail and one of them targets private investigator Lauren Pauling, a former FBI agent with ties to Reacher.Pauling teams with former special forces operative Michael Tallon not only to survive, but to clear Reacher's name.The sixth installment of the Jack Reacher Cases is a pulse-pounding, nonstop thrill ride that will leave you breathless until the final, shocking twist. .

"Ames is a sensation among readers who love fast-paced thrillers." -MysteryTribune

"Swept me along for the ride." -Edgar-nominated author Craig McDonald