In 2012, on the eve of Vladimir Putin’s inauguration for a controversial third term as president, mass protests ended in violent clashes between demonstrators and the police. ‘They ruined my big day, now I’m going to ruin their lives,’ Putin was alleged to have said. Now Boris Nemtsov is dead, other key opposition leaders are either in prison or under house arrest and the Kremlin is using the situation in Ukraine to further its domestic aims, encouraging the rise of violent pro-Putin groups and labelling protesters ‘national traitors’.

Journalist and long-time Moscow resident Marc Bennetts examines how Putin and his shadowy advisers crushed Russia’s brave new protest movement. Featuring rare interviews with everyone from Nemtsov and other protest leaders to Kremlin insiders, Bennetts provides an unprecedented insight into the realities of politics on the ground. The result is a brilliant portrayal of the battle for Russia’s soul – one which continues to this day. 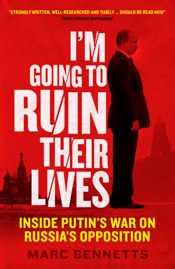