“One of the definitive works on the Israeli Palestinian conflict” from the celebrated New York Times–bestselling author of Hopes and Prospects (Amy Goodman, host of Democracy Now! and author of Breaking the Sound Barrier).

From its establishment to the present day, Israel has enjoyed a unique position in the American roster of international friends. In Fateful Triangle, Noam Chomsky explores the character and historical development of this special relationship. The resulting work “may be the most ambitious book ever attempted on the conflict between Zionism and the Palestinians viewed as centrally involving the United States. It is a dogged exposé of human corruption, greed, and intellectual dishonesty. It is also a great and important book, which must be read by anyone concerned with public affairs” (Edward W. Said, from the foreword).

“A devastating collection of charges aimed at Israeli and American policies that affect the Palestinian Arabs negatively.” ―Library Journal

“Brilliant and unscrupulous.” ―The Observer

“A major, timely and devastating analysis of one of the great tragedies.” ―The Tribune 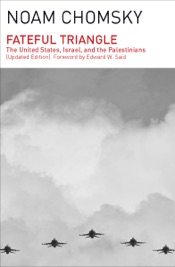