This revised and updated first edition of Two Skis and a Rifle introduces the reader to biathlon, the Winter Olympic endeavor that simultaneously combines precision rifle marksmanship under the duress of cross-country (Nordic) skiing.  With roots in Norwegian and global military history, the sport has blossomed from high latitude training exercises into a modern annual World Cup season.  Novice and dedicated fans alike will discover technical details on and athlete accounts of travelling to and navigating around typical venues, physical requirements of training and competing, team and athlete race preparation, rifle construction and marksmanship, ski fabrication and technique, and the diversity of competitions and rules governing the sport, not least of which are efforts to control doping.  There is a decidedly American slant to the writing which the author humbly hopes will generate wider interest and understanding of biathlon in the United States.  In fact, the United States recently has had great success on the World Cup circuit, placing athletes in the medals at the yearly World Championships, the single most important event in the sport other than the Winter Olympic Games.  There is no better time than now to become acquainted with this most popular European spectacle. 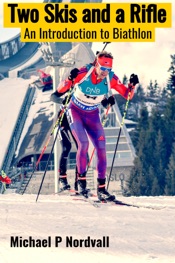