He didn't just break her heart, he broke her soul…

When a bomb exploded at her college, Caitlyn Carlson's life changed in an instant. Ten years later, she's no longer a vulnerable, trusting girl, but a tough, ruthless, FBI agent. But her hard exterior covers a deep, aching hole in her heart.

Quinn Kelly has changed his life, too, trying to make up for the horrific mistakes of his youth. But some mistakes can't be outrun or forgiven. Some feelings don't stay buried, no matter how hard you try.

An explosion at a local university takes them back to the past, to the one place they never wanted to go again…and to each other. They barely survived loving each other the first time around. The secrets and lies almost killed them. Will this be their second chance, or will this be the end of everything?

What the readers are saying…

"The action was intense and kept me on the edge of my seat! Barbara Freethy is an amazing writer who captures the reader's attention from the very first sentence, so much so, I read this book in one sitting." 5 Stars! Booklover's Anonymous

"Standing in the shadows of love, you can't help but feel the heartache to come. Daring Deception paints a thrilling picture of a dangerous love story. Brodie and Caitlyn pull emotions into a maze that is powerful, intriguing and neverending. With Freethy there is always a twist to tie emotions up in knots and leave readers feeling breathless." Isha - Goodreads

There were a lot of twists and turns in this series that kept me guessing about what was going to happen next, and I definitely did not see the ending coming! This book was the perfect mix of romance and suspense, a page turner from beginning to end! Kate – Bookbub

"A story that builds on revenge, kidnapping , and forgiveness. A definite winner in this series." Ellen - Goodreads 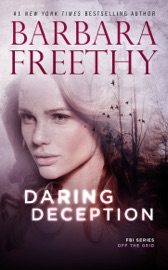