A 1949 series of articles on life in post-World War II Germany, written by an undercover German reporter for an American paper—and the story behind them.

Wolfe Frank was chief interpreter at the Nuremberg Trials where he was dubbed “The Voice of Doom.” A playboy turned resistance worker branded an “enemy of the state—to be shot on sight,” he had fled Germany for England in 1937. Initially interned as an “enemy alien,” he was later allowed to join the British Army where he rose to the rank of captain. Unable to speak English when he arrived, he became, by the time of the trials, the finest interpreter in the world.

In the months following the trials, the misinformation coming out of Germany began to alarm Frank, so in 1949, backed by the New York Herald Tribune, he returned to the homeland he once fled to go undercover and report on German post-war life. He worked alongside Germans in factories, on the docks, in a refugee camp, and elsewhere. Carrying false papers, he sought objective answers to many questions including refugees, anti-Semitism, morality, de-Nazification, religion, and nationalism. Among the many surprises in Frank’s work was his single-handedly tracking down and arresting the SS General ranked fourth on the Allies most wanted list—and personally taking and transcribing the Nazi’s confession.

The Undercover Nazi Hunter not only reproduces Frank’s series of articles (as he wrote them) and a translation of the confession—which until now has never been seen in the public domain—but also reveals the fascinating behind-the-scenes story of a great American newspaper agonizing over how to manage this unique opportunity and these important exposés. 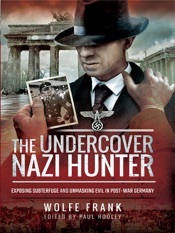