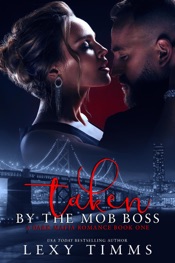 EVIL begins when you start to treat people as things…

A kidnapping isn't how I expected to meet the woman of my dreams.

But when my brother, intent on proving himself as the hardcore gangster he wants to be, comes up with the idea to kidnap the daughter of a powerful crime boss, I know I can't stop him. And that's how I meet Charlotte.

Beautiful, intelligent, graceful – and hurting from the life she's been trapped into living. She wants to get out of this world just as much as I do, and it doesn't take long till we fall for each other, hard and fast.

Except time is running out for both of us.

If we're going to be together, we need to act fast – and do something that we can never renege on...

Book 1 – Taken By The Mob Boss

Book 2 – Truce With The Mob Boss

Book 3 – Taking Over The Mob Boss

Book 4 – Trouble For The Mob Boss

Book 5 – Tailored By The Mob Boss

Book 6 – Tricking By The Mob Boss