Confused about the news? Slip out of the room when friends talk current events? Now you can keep up with ease and learn to talk like a diplomat.
Among the things you’ll soon be able to slip into everyday conversation:

What is the difference between Kurdistan and Kazakhstan?

Why did North Korea’s leader kidnap his favorite actress?

Why is Osama bin Laden so mad?

Which countries still have slaves?

Why is Kashmir “the most dangerous place in the world?”

What country has the most Muslims?

Why are they fighting in Chechnya?

Who is Prince Turki and how did his hunting trip change history?

How are cows fueling the fighting between India's Muslims and Hindus?

Which country drew maps that have resulted in the most intractable wars?

What is controversial UN Resolution 242?

What makes Qatar stand out?

What country does Sumatran coffee come from?

What country’s fakes forced the US to redesign the $100 bill?

Who is the FARC and why have they been fighting for decades?

An entertaining guide to political science, current events, foreign affairs, and history, What Every American Should Know about the Rest of the World gives you the vocabulary and background you need to decipher the modern world in a simple-to-understand format. 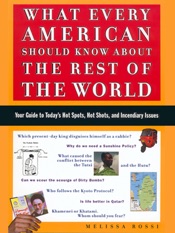