In 1937, Mount Lucania was the highest unclimbed peak in North America. Located deep within the Saint Elias mountain range, which straddles the border of Alaska and the Yukon, and surrounded by glacial peaks, Lucania was all but inaccessible. The leader of one failed expedition deemed it "impregnable." But in that year, a pair of daring young climbers would attempt a first ascent, not knowing that their quest would turn into a perilous struggle for survival. Escape from Lucania is their remarkable story.

Classmates and fellow members of the Harvard Mountaineering Club, Brad Washburn and Bob Bates were two talented young men -- handsome, intelligent, and filled with a zest for exploring. Both were ambitious climbers, part of a small group whose first ascents in the great mountain ranges during the 1930s and 1940s changed the face of American mountaineering. Setting their sights on summitting Lucania in the summer of 1937, Washburn and Bates put together a team of four climbers for the expedition. But when Bates and Washburn flew to the Walsh Glacier at the foot of Lucania, they discovered that freakish weather conditions had turned the ice to slush. Their pilot was barely able to take off again alone, and there was no question of returning with the other two climbers or more supplies. Washburn and Bates found themselves marooned on the glacier, more than a hundred miles from help, in forbidding and desolate territory. Eschewing a trek out to the nearest mining town -- eighty miles away by air -- they decided to press ahead with their expedition.

Escape from Lucania recounts Washburn and Bates's determined drive toward Lucania's 17,150-foot summit under constant threat of avalanches, blinding snowstorms, and hidden crevasses. Against awesome odds they became the first to set foot on Lucania's peak, not realizing that their greatest challenge still lay beyond. Nearly a month after being stranded on the glacier and with their supplies running dangerously low, they would have to navigate their way out through uncharted Yukon territory, racing against time as the summer warmth caused rivers to swell and flood to unfordable depths. But even as their situation grew more and more desperate, they refused to give up.

Escape from Lucania tells this amazing story in thrilling and vivid detail, from the climbers' exultation at reaching the summit to their darkest moments confronting seemingly insurmountable obstacles. It is a tale of awesome adventure and harrowing danger. But above all it is the story of two men of extraordinary spirit, inspiring comradeship, and great courage.

Today Washburn and Bates, now in their nineties, are legends in climbing circles. Bates co-led 1938 and 1953 expeditions to K2, the world's second-highest mountain. Washburn, whose record of Alaskan first ascents is unmatched, became founding director of Boston's Museum of Science and is one of the premier mountain photographers in the world. Some of his remarkable images from the 1937 Lucania expedition are included in this book. 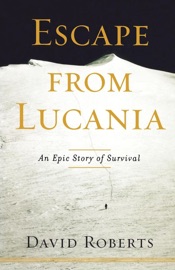