It starts with a knock at the door – something reclusive ex-detective Garrison Gage hates. When it's his teenage neighbor, whose girlfriend has gone missing just before Thanksgiving, Gage gets reluctantly pulled back into his old line of work - and ends up facing some fears of his own in Oregon's dark woods...Includes an extended preview of THE GRAY AND GUILTY SEA, also featuring Garrison Gage.

JACK NOLTE is the mystery and suspense pen name of award-winning writer Scott William Carter. Critics raved that The Gray and Guilty Sea, the first book featuring the crippled and curmudgeonly Garrison Gage, was "irresistible" and "a fascinating character study." Under his own name, Carter's first novel, The Last Great Getaway of the Water Balloon Boys, was hailed by Publishers Weekly as a "touching and impressive debut" and won the prestigious Oregon Book Award. Since then, he has published nine novels and over fifty short stories, his fiction spanning a wide variety of genres and styles. His most recent book for younger readers, Wooden Bones, chronicles the untold story of Pinocchio and was singled out for praise by the Junior Library Guild. He lives a stone's throw from the Oregon coast with his wife and two children. To find more information about Jack/Scott's other work, go to scottwilliamcarter.com. 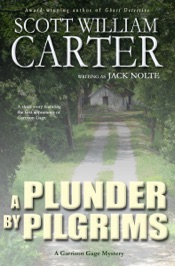