In a marshy Norfolk backwater, a priest is brutally murdered after giving a dying man last rites. For Scotland Yard’s Ian Rutledge, an ex-officer still recovering from the trauma of war, it looks to be a simple case. Yet the Inspector finds himself uncovering secrets that the local authorities would prefer not to see explored. Rutledge pares away layers of deception to piece together a chain of events that stretches from the brooding marshes to one of the greatest sea disasters in history—the sinking of the Titanic. Who is the mysterious woman who may have boarded that ship—and who is the secretive woman who survived it? Only Rutledge can answer those questions . . . and prevent a killer who’ll stop at nothing from striking again.

Praise for Watchers of Time

“One of the best historical series being written today . . . In the grand tradition of English murder mysteries.”—The Washington Post Book World

“With his tortured detective Ian Rutledge and the ghost who inhabits his mind . . . Charles Todd has swiftly become one of the most respected writers in the mystery genre. . . . The pair is unique among sleuths.”—The Denver Post 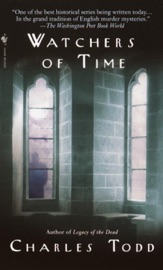