He was The Intimidator. A nightmare in the rear-view mirror. A unique winner in the boardroom. A seven-time Winston Cup champion. A driver whose personal success story and dedication inspired the adoration of millions of fans. Then on February 18, 2001, just seconds from the Daytona 500 finish line, the world of stock-car racing suffered a devastating loss as Dale Earnhardt fatally careened into a track wall. The tragic shock waves, and an unprecedented outpouring of respect and love, have not stopped since.

At the Altar of Speed takes readers behind the scenes of Earnhardt's celebrated life, tracing his rags-to-riches journey to the top of America's fastest-growing sport. Beginning with Earnhardt's early days growing up in small-town North Carolina, veteran sports writer Leigh Montville examines how a ninth-grade dropout started on the dusty dirt tracks of the South, went through two marriages and a string of no-future jobs before turning twenty-five, then took about a million left turns to glory. Through the pitfalls and triumphs, Earnhardt would ultimately become a celebrated champion, whose lifetime earnings would top forty-one million dollars. The son of a legendary racer, the father of a NASCAR star, he lived a total auto-racing life filled with triumph and sadness, great joy and great pain.

Transporting readers to the colorful, noisy world of stock-car racing, where powerful engines allow drivers to reach speeds of 200 m.p.h., At the Altar of Speed vividly captures the man who drove the black No. 3 car, a man whose determination and inner strength left behind a legacy of greatness that has redefined his sport. Illustrated with a section of full-color photographs, At the Altar of Speed is a tribute to both the man and his unbeatable spirit. 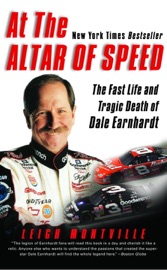