May 1996 began like most other climbing seasons on Mount Everest. The arrival of spring brought the usual pre-monsoon period, with teams of hopeful mountaineers ready to reach for the roof of the world. Among the dozens of climbers were Jon Krakauer and Anatoli Boukreev (who would both later write their own accounts of what followed) and Matt Dickinson. But on May 10, with ten different expeditions strung out along the mountain, the usual turned deadly. Suddenly, the temperature dropped from merely frigid to 40 degrees below zero. A killer storm with howling winds swept in and climbers were soon blinded in white-out conditions. Before it was over, the blizzard would claim a dozen lives, the worst loss of life in the modern history of climbing on Everest.

Dickinson, an adventure filmmaker, was part of an expedition challenging the treacherous North Face of Everest, on the Tibetan side. Of the nearly 700 people who have scaled Everest since the first ascent in 1953, barely 230 have managed to ascend via the colder and technically more difficult route up the North Face. In addition to climbing through the storm, which would test him beyond his imagining, Dickinson also filmed the ascent. He and his team watched in awe as violent clouds gathered over the mountain and swept them all up in a frightening white force. Dickinson was a relative novice who had never climbed at this crushing altitude, and the storm preyed on his mind, throwing into question his entire mission. Despite this uncertainty and the treacherous conditions, Dickinson and his partner Alan Hinkes continued their climb, compelled to reach the summit.

Dickinson's first-person narrative--the only account of the killer storm written by a climber who was on the North Face--places the reader amid the swirl of the catastrophe, while providing rare insight into the very essence of mountaineering. The Other Side of Everest is a portrait of personal triumph set against the most disastrous storm to ever befall the world mountaineering community. Anyone who has ever pushed beyond familiar limits of physical and psychological endurance will cherish this book. 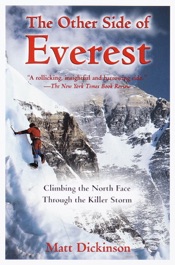