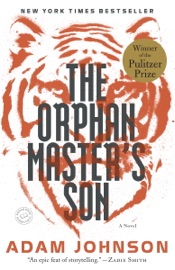 The Pulitzer Prize–winning, New York Times betselling novel of North Korea: an epic journey into the heart of the world’s most mysterious dictatorship.

“Imagine Charles Dickens paying a visit to Pyongyang, and you see the canvas on which [Adam] Johnson is painting here.”—The Washington Post

Pak Jun Do is the haunted son of a lost mother—a singer “stolen” to Pyongyang—and an influential father who runs a work camp for orphans. Superiors in the North Korean state soon recognize the boy’s loyalty and keen instincts. Considering himself “a humble citizen of the greatest nation in the world,” Jun Do rises in the ranks. He becomes a professional kidnapper who must navigate the shifting rules, arbitrary violence, and baffling demands of his overlords in order to stay alive. Driven to the absolute limit of what any human being could endure, he boldly takes on the treacherous role of rival to Kim Jong Il in an attempt to save the woman he loves, Sun Moon, a legendary actress “so pure, she didn’t know what starving people looked like.”

Named ONE OF THE BEST BOOKS OF THE YEAR by more than a dozen publications, including The Washington Post • Entertainment Weekly • The Wall Street Journal • Los Angeles Times • San Francisco Chronicle

Praise for The Orphan Master’s Son

“An exquisitely crafted novel that carries the reader on an adventuresome journey into the depths of totalitarian North Korea and into the most intimate spaces of the human heart.”—Pulitzer Prize citation

“Mr. Johnson has written a daring and remarkable novel, a novel that not only opens a frightening window on the mysterious kingdom of North Korea, but one that also excavates the very meaning of love and sacrifice.”—Michiko Kakutani, The New York Times

“Rich with a sense of discovery . . . The Orphan Master’s Son has an early lead on novel of [the year].”—The Daily Beast

“This is a novel worth getting excited about.”—The Washington Post

“[A] ripping piece of fiction that is also an astute commentary on the nature of freedom, sacrifice, and glory.”—Elle