This landmark 1971 classic is reprinted with a new preface, chapter-by-chapter commentary, and straight-from-the-heart observations on topics that affect the professional life of programmers.

Long regarded as one of the first books to pioneer a people-oriented approach to computing, The Psychology of Computer Programming endures as a penetrating analysis of the intelligence, skill, teamwork, and problem-solving power of the computer programmer.

Finding the chapters strikingly relevant to today's issues in programming, Gerald M. Weinberg adds new insights and highlights the similarities and differences between now and then. Using a conversational style that invites the reader to join him, Weinberg reunites with some of his most insightful writings on the human side of software engineering.

The author says, "On an inspired eight-week vacation in Italy, I wrote the first draft of The Psychology of Computer Programming. . . . the book quickly became a best-seller among technical titles, running through more than twenty printings and staying in print for twenty-five years. . . .

"For this Silver Anniversary Edition, I decided to take my own advice and not try to hide my errors, for they would be the source of the most learning for my readers. I decided to leave the original text as it was—antiques and all—for your illumination, and simply to add some 'wisdom of hindsight' remarks whenever the spirit moved me. I hope you find the perspective brought by this time-capsule contrast as useful to you as it has been to me."

J.J. Hirschfelder of Computing Reviews wrote: "The Psychology of Computer Programming . . . was the first major book to address programming as an individual and team effort, and became a classic in the field. . . . Despite, or perhaps even because of, the perspective of 1971, this book remains a must-read for all software development managers."

Sue Petersen of Visual Developer said: "In this new edition, Jerry looks at where we were 30 years ago, where we are now and where we might be in the future. Instead of changing the original text, he's added new comments to each chapter. This allows the reader to compare and contrast his thinking over the decades, showcasing the errors and omissions as well as the threads that bore fruit.
". . . one issue -- communication -- has been at the core of Jerry's work for decades. Unknown to him at the time, Psychology was to form the outline of his life's work. . . . Psychology is valuable as history in a field that is all too ready to repeat the errors of its past. Read Psychology as a picture of where we've been, where we are now, and where we need to go next. Read it as an index to the thinking of one of the most influential figures in our field." 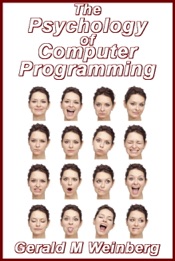