Fascinating narrative science that explores the next frontier in medicine and genetics through the very personal prism of the children and families gene therapy has touched.

Eight-year-old Corey Haas was nearly blind from a hereditary disorder when his sight was restored through a delicate procedure that made medical history. Like something from a science fiction novel, doctors carefully injected viruses bearing healing genes into the DNA of Corey's eyes—a few days later, Corey could see, his sight restored by gene therapy.

THE FOREVER FIX is the first book to tell the fascinating story of gene therapy: how it works, the science behind it, how patients (mostly children) have been helped and harmed, and how scientists learned from each trial to get one step closer to its immense promise, the promise of a "forever fix," - a cure that, by fixing problems at their genetic root, does not need further surgery or medication.
Told through the voices of the children and families who have been the inspiration, experimental subjects, and successes of genetic science, THE FOREVER FIX is compelling and engaging narrative science that tells explores the future of medicine as well as the families and scientists who are breaking new ground every day. 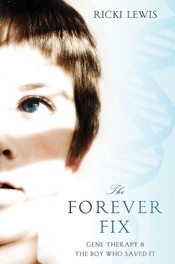