BIRBAL THE JUST
Tales of Birbal

Birbal had proved himself to be the most reliable minister at court, time and again. He dispensed justice, dealt diplomatically with other rulers, led military expeditions and composed poetry.

In addition, Birbal also rescued Akbar the emperor from the dangers of arrogance and unfettered power. Most importantly, he made the Great Mughal laugh.

Birbal, whose real name was 'Maheshdas', was one of the 'nine gems' of court advisers of Akbar the Great. He composed poetry by another pen name 'Brahma'. He led a famous expedition into faraway Afghanistan and managed to subdue the turbulence there. Hearing the news of his death there, Akbar burst forth: "Birbal, you always gave the helpless whatever you had. I am helpless now and yet you have left nothing for me!"

Birbal's name however does not rest on these achievements. He turned into a legend by the innumerable stories of his wit and wisdom, sense of justice and fair play, and above all, his uncanny skill in turning the tables on his detractors. 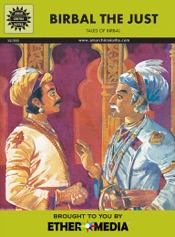