"This book is Gamow at his best, which means the very best in science for the layman." — Library Journal
Widely recognized as one of the 20th century's foremost physicists, George Gamow was also an unusually capable popularizer of science. His talents are vividly revealed in this exciting and penetrating explanation of how the central laws of physical science evolved — from Pythagoras' discovery of frequency ratios in the 6th century B.C. to today's research on elementary particles.
Unlike many books on physics which focus entirely on fact and theory with little or no historic detail, the present work incorporates fascinating personal and biographical data about the great physicists of past and present. Thus Dr. Gamow discusses on an equal basis the trail of Galileo and the basic laws of mechanics which he discovered, or gives his personal recollections about Niels Bohr along with detailed discussion of Bohr's atomic model. You'll also find revealing glimpses of Newton, Huygens, Heisenberg, Pauli, Einstein, and many other immortals of science.
Each chapter is centered around a single great figure, or at most two, with other physicists of the era and their contributions forming a background. Major topics include the dawn of physics, the Dark Ages and the Renaissance, Newtonian physics, heat as energy, electricity, the relativistic revolution, quantum theory, and the atomic nucleus and elementary particles.
As Dr. Gamow points out in the Preface, the aim of this book is to give the reader the feeling of what physics is, and what kind of people physicists are. This delightfully informal approach, combined with the book's clear, easy-to-follow explanations, will especially appeal to young readers but will stimulate and entertain science enthusiasts of all ages. 1961 edition.
"The whole thing is a tour de force covering all the important landmarks." — Guardian 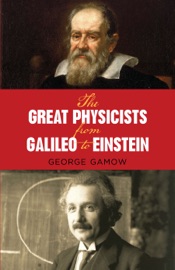