William Dalrymple, who wrote so magically about India in ‘City of Djinns’, returns to the country in a series of remarkable essays.

Featured in its pages are 15-year-old guerrilla girls and dowager Maharanis; flashy Bombay drinks parties and violent village blood feuds; a group of vegetarian terrorists intent on destroying India’s first Kentucky Fried Chicken outlet; and a palace where port and cigars are still carried to guests on a miniature silver steam train.

Dalrymple meets such figures as Imran Khan and Benazir Bhutto; he witnesses the macabre nightly offering to the bloodthirsty goddess Parashakti – She Who Is Seated on a Throne of Five Corpses; he experiences caste massacres in the badlands of Bihar and dines with a drug baron on the North-West Frontier; he discovers such oddities as the terrorist apes of Jaipur and the shrine where Lord Krishna is said to make love every night to his 16,108 wives and 64,732 milkmaids.

‘The Age of Kali’ is the fourth fascinating volume from the author of ‘In Xanadu’, ‘City of Djinns’ and ‘From the Holy Mountain’.

‘The future of travel writing lies in the hands of gifted authors like Dalrymple’ Sara Wheeler, Independent

William Dalrymple’s first book, In Xanadu, won the Yorkshire Post Best First Work Award and the Scottish Arts Council Spring Book Award, and was shortlisted for the John Llewelyn Rhys Prize. His second, City of Djinns, won the Thomas Cook Travel Book Award and the Sunday Times Young British Writer of the Year Award. His third, From the Holy Mountain, was published in April 1997. He is the youngest Fellow of the Royal Society of Literature, and has recently written and presented a six-part series on the buildings of the Raj for Channel 4. 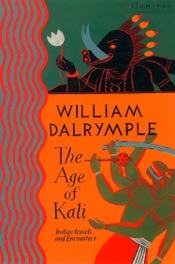