‘Tribes With Flags’ is the gripping story of Charles Glass's dramatic journey through Greater Syria which provides background context to a troubled region once again in the headlines.

Charles Glass began his journey through the former Arab nations of the Ottoman Empire by exploring farms, refugee camps and feudal palaces to capture the full spectrum of Levantine life. But his literary and spiritual ramble was abruptly interrupted when on 17 June 1987 he was kidnapped by Shi'a militants. What followed, 62 days later, was a daring escape that captivated the world’s media.

In this classic travelogue, the former ABC Middle East correspondent records an adventure which took him through Turkey, Syria, Israel, Jordan and the Lebanon. An honest, colourful and immediate tale of wanderlust and history, ‘Tribes with Flags’ is an essential back-story to our understanding of the complexity of the region, and the gripping testimony of one of the few hostages who has escaped its maelstrom to tell his tale.

Reviews for Tribes with Flags:

'I am a lifetime admirer of T.E. Lawrence, but I can’t help but remark what a great book his ‘Seven Pillars of Wisdom’ would have been had he been as gifted a writer as Charles Glass’ Evening Standard

‘But for the daring escape, after more than two months in chains, he might be there still, and the world would have been denied a marvellous book’ Economist

‘A travel book in the classic style, discursive, inquiring, agreeable, and set in places well off the tourist track’ Independent

Former ABC News Chief Charles Glass has lived in Beirut for six years and covered the Middle East as a journalist for twenty-five years. 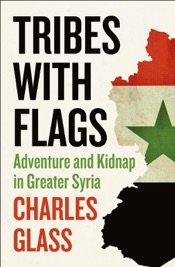