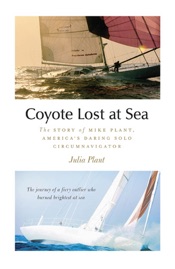 "Mike's final 12 days at sea . . . remain a testimony to his almost superhuman ability to drive one of the fastest sailing boats ever built, in extreme conditions, and survive for as long as he did. When the boat was found, it proved that, despite everything, Mike had kept Coyote on course. Or maybe Coyote had kept them both on course, as long as she was able." -- Julia Plant

Coyote Lost at Sea is the story of Mike Plant, one of the most exciting and daring round-the-world solo sailors of his time. Mike's untamed courage and charismatic personality naturally drew fans and admirers who wondered what kind of risk he would take next. His younger sister, Julia Plant, had been one of those admirers until Mike's flame burned too brightly and she needed to find her own way.

This distant, yet ultimate, love for her brother makes Julia the perfect one to tell his story. She reveals a vivid, raw version of her brother--a boy who spent most of his teen years and twenties getting in trouble with the law, but who later grew up to be a sailing living legend. Her insight into his personality and what made him so fearless helps us understand why Mike would take such a gamble with a boat like Coyote. Her research and interviews with Mike's friends, fellow competitors, and sailing experts paints a clearer picture of Mike's last days with the controversial Coyote, a mystery that has intrigued the world of sailing for two decades.