Spies! Women in the Civil War tells the thrilling stories of women who served as spies for the North and for the South--Harriet Tubman led Union troops on raids up the Combahee River in South Carolina; Belle Boyd provided information to Confederate generals; Elizabeth Van Lew organized a spy ring in Richmond, Virginia, the capital of the Confederacy, which included an insider on President Jefferson Davis’ staff; Rose O’Neal Greenhow operated a network of spies in Washington, D.C. They were a diverse group of women. Belle Boyd was a teenager. Harriet Tubman, Rose O’Neal Greenhow, and Elizabeth Van Lew were in their forties. Tubman was an unschooled former slave. Greenhow, Van Lew, and Boyd were well-educated and wealthy. Boyd and Greenhow supported slavery. Tubman and Van Lew despised it. Smart, brave, committed, and clever, the women spies were undaunted by the risks of getting shot, arrested, imprisoned, even hanged. Their stories are awesome and inspiring. And in some cases, their stories are almost unbelievable. Chronology, Historic Places To Visit, Further Reading 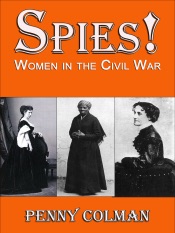