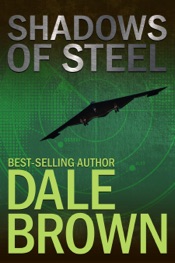 The new Gulf War is erupting, and this one will be far bloodier than the first. A newly powerful Iran is flexing its military muscle in the Middle East. The Iranians have declared the Persian Gulf their territorial waters-and an American ship has just been sunk to prove the point.

With a military racked by budget cuts and a public reluctant to fight, the president must end the crisis before it escalates. The solution: Project Future Flight, a surgical stealth campaign to silence Iran’s modern weapons. The personnel: Colonel Patrick McLanahan and the surviving crew of the Old Dog. The stakes: success-or full-scale war…

Dale was born in Buffalo, New York on November 2, 1956. He graduated from Penn State University with a degree in Western European History and received an Air Force commission in 1978. He was a member of the first class of Air Force ROTC cadets to qualify for and complete the grueling three-week U.S. Army Airborne Infantry paratrooper training course at Fort Benning, Georgia in 1977.

Dale was a navigator-bombardier in the B-52G Stratofortress heavy bomber and the FB-111A supersonic medium bomber, and an instructor on aircrew life support and combat survival, evasion, resistance, and escape. He is the recipient of several military decorations and awards including the Air Force Commendation Medal with oak leaf cluster, the Combat Crew Award, and the Marksmanship ribbon.

Dale is a command pilot in Angel Flight West, a group that volunteer their time, skills, and aircraft to fly needy medical patients free of charge to receive medical treatment. Dale is also a mission pilot and deputy squadron commander in the Civil Air Patrol, which performs search and rescue, disaster relief, humanitarian assistance, surveillance, and many other missions in support of the U.S. Air Force and other federal agencies. He supports a number of organizations to promote law enforcement, education, literacy, and support for military veterans and their families.

Dale Brown is a Life Member of the Air Force Association, U.S. Naval Institute, and National Rifle Association. He is a multi-engine and instrument-rated private pilot and can often be found in the skies all across the United States, at the controls of his Cessna P210 Centurion. On the ground, Dale is a youth soccer  referee and referee instructor and enjoys tennis and scuba diving. Dale, his wife Diane, and son Hunter live near Lake Tahoe, Nevada.