In a prologue, 25 action-packed chapters, and detailed endnotes, SPIES AGAINST ARMAGEDDON: INSIDE ISRAEL'S SECRET WARS covers more ground than any other book about modern-day Israel. It is filled with colorful characters, who risk their lives and reputations in the secret service of their nation. Recent upheavals in the Middle East include Syria's civil war, coups in Egypt, a controversial nuclear deal with Iran, and a sense of despair between Israelis and Palestinians. This history of the Mossad and the other espionage and security agencies of Israel spotlights unique people who have contributed to the survival, success, but continuing crises of the Jewish state. The authors had a national best seller in 1990, "Every Spy a Prince: The Complete History of Israel's Intelligence Community" and also wrote about U.S.-Israel relations in "Friends In Deed." Dan Raviv is an i24NEWS TV correspondent based in Washington, and Yossi Melman is an award-winning Israeli journalist based in Tel Aviv. They have a global reputation for being fair and balanced, without exaggeration about Israel's covert achievements -- and flaws -- in the defense of a nation that always sees itself as embattled. 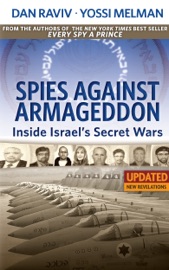